Broken Hands - If You Need To Lie Video

Indie rock quartet Broken Hands who hail from Faversham, Kent are set to release their third new single 'If You Need To Lie' on May 28th 2012 accompanied by a headlining UK tour this summer.

A new music video was released in connection with the release; a simple black and white performance video that captures the essence of raw indie rock and delivers no distraction from the heavy bass lines, heart-stopping drum beats and slurring, gritty vocals. The song itself is catchy and upbeat - perfect for 2012's summer festivals which include Bristol, Nottingham and Manchester's Dot To Do Festival, Rockness Festival and Lounge on the Farm Festival in Canterbury.

They have previously released their debut single 'Brother' and became the first band to be signed on Edwyn Collins' new record label AED, as well as supporting Southampton rock band Band of Skulls on their European tour and their UK tour which concluded in March this year. They released their second single 'Sorrow' earlier this year.

They were very recently announced to be making a supporting appearance at the T in The Park Festival, Kinross-shire on the Saturday alongside The Stone Roses, David Guetta, Jessie J, Calvin Harris and Noel Gallagher's High Flying Birds. 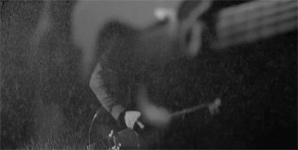 Broken Hands - If You Need To Lie Video