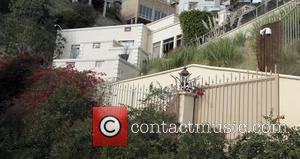 Picture: Brittany Murphy's home. LAPD are also on the scene. Brittany Murphy died of cardiac arrest early Sunday morning, after her mother had found her unconscious...

The sudden death of Brittany Murphy "appears to be natural" and foul play is not suspected, according to officials from the Los Angeles Coroner's office.
Hollywood was in shock on Sunday (20Dec09) as the news broke of the Clueless actress' passing at her home.
A spokesperson for L.A.'s Cedars-Sinai Medical Center confirmed the star was dead on arrival at the hospital, but refused to give any other details.
However, online reports suggest Murphy was found unconscious in the shower by her mother, and had suffered a fatal cardiac arrest.
But, despite not revealing any further details of what might have caused the star's untimely demise, the Los Angeles Assistant Chief Coroner Ed Winter insists her death appears to be from natural causes.
He tells Access Hollywood, "It appears to be natural at this time. We do understand she had a bit of medical history."
It is believed the actress suffered from diabetes.
Coroner Captain John Kades adds, "Foul play is not suspected at this time because there were no outward signs of trauma or other injuries."
Kades states that an autopsy will be conducted on Monday or Tuesday (21/22Dec09).