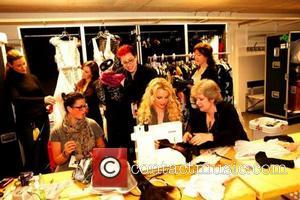 Picture: Britney Spears posted this photo on her Twitter account with the caption 'Sewing lesson in Sweden from the wardrobe team! Sweetest ladies :) -Brit' Sweden...

Britney Spears has failed to impress critics with her Femme Fatale Tour, which hit the UK this week. Britney Spears, who is currently travelling worldwide to promote her seventh studio album, has been blasted by various sources for her distinct lack of effort and original charm.
The Guardian stated: "Britney Spears's conundrum, at the age of 29, is how to translate the effortless apple-pie sex appeal she once possessed into a marketable product as an adult performer. Judging by the evidence of her Femme Fatale tour at the O2 on Thursday, Spears has conspicuously failed to do so", whilst Metro reports that even Jedward's appearance on stage with the pop princess last night (29 Oct 2011) failed to ignite the show. The Daily Mail's Adrian Thrills even went as far as to say: "What the show lacked, moreover, was soul' even though commenting that 'the Hold It Against Me star nevertheless looked well, and far fitter than she has in recent years". However, this didn't stop the thousands of screaming fans enjoying the show, all dressed in the various looks that the pop icon has donned over the past decade. The show, whilst mostly sold out, hit further controversies this month when discounted tickets for her Birmingham show were offered to fill up seats.
The UK leg of Britney Spears' Femme Fatale tour will last until November 6th. Her fourth single from the Femme Fatale album, 'Criminal', whose video was shot in London last month, is out now.