Britney Spears begins her two year residency at the Planet Hollywood Resort and Hotel at the end of this month and ahead of her stay, the singer was welcomed to Vegas with a typically tacky show earlier this week. The organisers of her arrival to Planet Hollywood pulled out all the stops for Britney on her trip to see her work base for the next 24 months, as the singer was paraded through the streets of Vegas on her way from the airport to hotel.

Her new album, Britney Jean, is out now

The welcoming party began with eight blocks of usually-busy street being closed down especially for her arrival. The closure was put in place to allow an eight-car caravan to deliver Britney to Planet Hollywood, with the route soon teeming with Britney fans, some who held up 'Happy Birthday' signs for the singer, who turned 32 on Monday, 2 December. Fans then got to see a glimpse of the singer as she rode through town in a white 1958 Chevy Impala, parading through the town like a returning hero.

"I already feel like home here at Planet Hollywood," the singer said once her parade ceremony had ground to a halt, via the Las Vegas Sun. "It's so nice to celebrate with this incredible welcome. I'm so excited for everyone to experience the new show. Now it's just a few weeks."

Although her purpose in Vegas is to entertain, on Tuesday (3 Dec.) afternoon Britney's sole purpose in Vegas was to be entertained. As such, the organisers of the trip put together a variety act consisting of some very-Vegas performances, with snake charmers, acrobats, contortionists and a dance routine from some nearly-naked showgirls and some male dancers. Planet Hollywood president David Hoenemeyer then presented the resort's new star attraction with a bouquet of roses and wished her a happy birthday and congratulated her on her new album.

Britney begins her residency in Vegas on 27 December, starting a contract that ties her down to do 50 shows per year between 2014 and 2015. Her new album, Britney Jean, is out now.

See all the behind-the-scenes pictures of Brit's video shoot 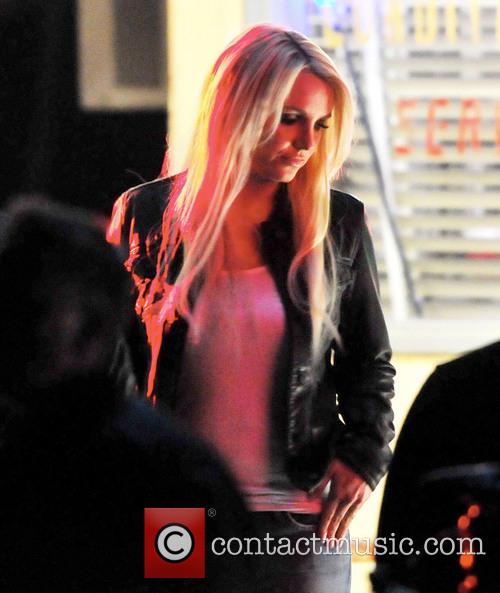 Britney is currently filming the video for 'Perfume'