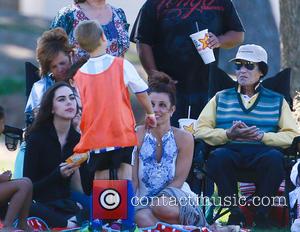 Britney Spears has silenced rumours she has split from her boyfriend by posting a picture of the pair online.

The Toxic singer has been at the centre of speculation suggesting she ended her relationship with David Lucado last month (Jun14).

Spears refused to comment on the gossip, but set the record straight on Wednesday (02Jul14) by sharing an intimate snap of herself posing with her partner on Facebook.com.

The image shows Spears wearing a snorkelling mask and smiling for the camera alongside a topless Lucado.

She captioned the picture: "Hola from Spears Beach aka mi casa (my home)."