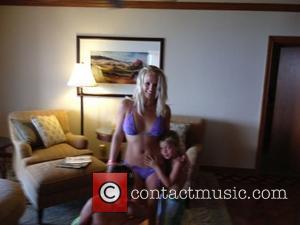 Britney Spears is certainly no stranger to a complex dance routine, though even the pop princess seemed a little confused by South Korean rapper Psy’s “invisible horse dance” on the Ellen Degeneres show this week.
The eccentric star’s video for ‘Gangnam Style’ recently went viral on YouTube, garnering over 147 million views. Psy dropped by Ellen’s show on Tuesday (September 11, 2012) to speak about the breakout hit and teach the accompanying dance routine, which the respected rapper explained was about dressing “classy” and dancing “cheesy”. Britney – also a guest on the show to promote The X Factor – looked bewildered when Psy initially appeared on-stage wearing a tuxedo and tennis shoes. DeGeneres’ excitement to learn the routine meant she failed to properly introduce Psy to Spears, leading the rapper to quite rightly interject, “Can I introduce myself, and not just dance? I'm Psy from Korea.” The rapper performed at the MTV Video Music Awards last week, and has already been snapped up by Scooter Braun – the mastermind behind a little fella named Justin Bieber. Psy will begin releasing material on Scooter’s Schoolboy Records label, home to fellow viral star Carly Rae Jepsen.
34-year-old Psy has actually released six records to date, including his wonderfully titled 2001 debut ‘Psy From the PSYcho World!”