Britney Spears gave a male fan at her concert in Los Angeles a thrill last night (20.06.11) when she performed a sexy lap dance for him on stage. 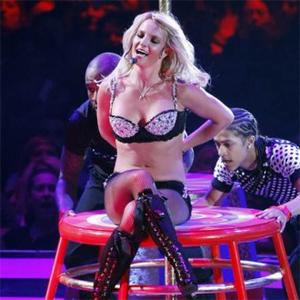 Britney Spears thrilled a concertgoer at her show last night (20.06.11) by giving him a lap dance on stage.

The 29-year-old singer was performing 'Leather and Lace' at the Staples Centre in Los Angeles as part of her 26-date 'Femme Fatale' tour when she performed the provocative dance for the male fan - using a Pink feather boa to tease him - before straddling his neck with her legs.

Britney performed a similar dance on a surprised fan in San Jose last week while it has been reported she tied up boyfriend Jason Trewick and straddled him in front of close friends and family during a tour rehearsal earlier this month.

Britney - who has two sons, Sean Preston, five, and Jayden James, four, with ex-husband Kevin Federline - and 39-year-old Jason are thought to be secretly engaged after the talent manager popped the question recently by writing her a romantic poem.

After filling the ground floor of the couple's Los Angeles mansion with roses and candles, Jason reportedly presented Britney with a flower-shaped diamond ring with an insider confirming: "She's on cloud nine."

Britney - whose first marriage to childhood friend Jason Alexander was annulled just 55 hours after they said "I do" in Las Vegas in 2004 - is now said to be planning a "low-key" ceremony in Hawaii once she has completed her world tour.