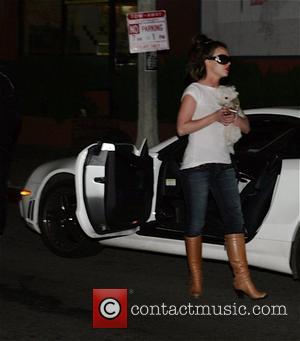 Britney Spears does not want to regain custody of her two children, according to her first husband.

Jason Alexander, who was married to the Toxic star for only 55 hours in 2004, claims Britney has all but given up fighting her second husband, Kevin Federline, for custody of Sean Preston, two, and one-year-old Jayden James.

The 26-year-old singer and Federline have been involved in a lengthy custody dispute since their divorce last year and lost visitation rights to the two boys after her dramatic hospitalisation last month.

Talking to In Touch magazine, Alexander said Britney does not want to have permanent custody of her sons.

"She wants to see them, but she doesn't want to be a full-time mom," he explained. "She said it doesn't matter if she doesn't get them back full-time, and that she can always have other kids later on."

He added that while she "misses" her children, he does not believe she should be awarded full custody "because she needs to focus on her".

Britney was recently released from the UCLA medical centre in Los Angeles after being admitted under the recommendation of her psychiatrist.

Her father James has been awarded temporary conservatorship of her affairs and a restraining order has been issued against former manager and confidante Sam Lufti, thought to be a damaging influence in the pop star's life.

Alexander claimed Britney is aware of her mental issues, saying: "She does want to get better. She doesn't sound as crazy right now as she did three weeks ago, but she's not right. She isn't well enough to know what she wants."

The Louisiana native, a childhood friend of Britney's, revealed that he and the singer renewed their friendship shortly before Christmas.

"She said she'd call me back, and we've been speaking ever since."

Britney and Alexander married at the Little White Wedding Chapel in Las Vegas on January 3rd, 2004, but the marriage was annulled only 55 hours later.