Review of Man Of Aran Album by British Sea Power 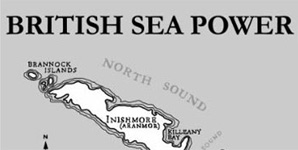 After receiving nominations for The Mercury Prize Awards, British Sea Power have gone into the abyss. They have not gone all commercial and looked to sell average records. This time they are releasing a DVD and CD package, obviously the CD is the Soundtrack to the film on the DVD, rather than your normal run of the mill live DVD/CD.

The Soundtrack is to Robert Flaherty's 1934 documentary film, well what you can say about this film? The film opens with a brief description of the scene which reads.

. The Aran Islands lie off Western Ireland all three are small.waters of rock. without trees. without soil.
In winter storms they are almost smothered by the sea. which, because of the peculiar shelving of the coastline, piles up into one of the most gigantic seas in the world.

In this desperate environment the Man of Aran, because his independence is the most precious privilege he can win from life, fights for existence, bare though it may be.

Let's face it though it's hardly Star Wars is it? The one thing that is a little baffling is why? Why? Re-release this? And why get a band to do the music for it? The whole thing just seems to hold no purpose.

The extras on it are different versions of the sound track ranging from a bonus version to a live version and a studio version. As for the film, hmmmm, aaaaahhhhh well all that can be said is that it is lucky that this reviewer is a music reviewer and not a film reviewer. There just is no point to it all, this is showing fisherman, fishing in the thirties and their technique is somewhat twenty years out of date.

The CD is a typical Soundtrack really. The film has minimum lyrics in it, the only thing it has is British Sea Power's music compiled especially for this. In all reality this is not a typical British Sea Power album and maybe should have been released under a different name as a side project because 'Man Of Aran' as a record holds nothing at all. It is something that will end up basking in the bargain bins at all good and bad record shops.

This is a massive gamble for British Sea Power and let's hope people are not put off the fact that the guys fancied a changed. More importantly lets hope they haven't got a taste for this and have got it out of there system. The thing about British Sea Power is we all know what they are capable of and they shouldn't be black listed just because they have tried something different even if it's not all together there!