British Sea Power (formed 2000)
British Sea Power is a British indie rock band. Though they are now based in Brighton, three of the band members are originally from Kendal in Cumbria. The band line-up is Yan (guitar & vocals), Noble (guitar, piano & keyboards), Hamilton (bass, vocals & guitar) and Wood (drums). They have also been joined by Abi Fry on viola.

Formation: Yan, Hamilton and Wood were school friends in Cumbria and were all in a number of different bands together whilst they were at school. Yan moved away to attend university in Reading, where he met Noble. Hamilton and Woody joined them and formed the band. After recording a demo in Reading, the band moved to Brighton and began to attract a large following, partly owing to their club night, Club Sea Power, often hosted at the Freebutt venue. The band's debut single, 'Fear Of Drowning' was released on the band's own label, Golden Chariot. In 2001, Geoff Travis, of Rough Trade Records saw the band play live and offered them a record deal. In 2002, Eamon Hamilton was recruited to play keyboards in their live shows.

Career: British Sea Power's debut album, The Decline of British Sea Power, was released in 2003. The album spawned the band's first Top 40 single, 'Carrion'. The band's success and popularity grew steadily and they eventually sold over 60,000 copies in the two years following its release. The band's second album, Open Season came out in 2005 and became a critical success as well as a commercial triumph, reaching number 13 in the UK album chart. The first single from the album, 'It Ended On An Oily Stage' previewed the album by reaching number 18 in the singles chart. In 2006, Eamon left the band to concentrate on his other outfit, Brakes. The band's third album was entitled 'Do You Like Rock Music?' and was released in January 2008. On 18th May, 2009, British Sea Power released 'Man of Aran' - a soundtrack album for the film of the same name. Their next studio album came in the form of 'Valhalla Dancehall'. The album was released on 13th October 2010, and received positive reviews. In February, 2013, the band released the title track for their upcoming album 'Machineries of Joy'. The album itself was later released on 1st April, 2013, to middling reviews. 'From The Sea to the Land Beyond: Britain's Coast on Film' was released on 13th June, 2012. The film was a documentary using music from British Sea Power throughout. The film was released on DVD with an accompanying soundtrack album in December 2013.

'From the Sea to the Land Beyond' is the latest album from Brighton based sextet British Sea Power. It is the soundtrack to Penny Woolcock's 2012 documentary of the same name which uses BFI footage of the coastal areas of England; something that can be defined as traditionally British and complements British Sea Power's style perfectly.

Having been well-established for over a decade, British Sea Power have always remained independent and faithful to their roots while acknowledging their fondness of individuality and interest into British history. Thus, they were a perfect choice to accompany the above film as well as stamp a unique sound.

Continue reading: British Sea Power - From The Sea To The Land Beyond Album Review

A Week In Music - Yeah Yeah Yeahs Progress From Punky Roots With Mosquito, 30 Seconds To Mars' 'Up In The Air' Comes With A Warning And Daft Punk Break Records With 'Get Lucky'

Continue reading: A Week In Music - Yeah Yeah Yeahs Progress From Punky Roots With Mosquito, 30 Seconds To Mars' 'Up In The Air' Comes With A Warning And Daft Punk Break Records With 'Get Lucky'

By Andrew Lockwood in Music Reviews on 25 April 2013

The Decline Of British Sea Power, the band's debut album way back in 2003, was thankfully not a prophecy about the likelihood of British Sea Power having a successful career post release. Ten years and four more albums have passed since we were treated to 'Fear Of Drowning' and 'Apologies To Insect Life' et al and the band show no signs of wilting away. What made the band such an individual and intriguing prospect back then is still largely what characterises their sound now. They are very British, slightly odd, idiosyncratic, individual and eclectic. They have a unique sound that is brilliantly balanced with lyrical dexterity and diversity and they play a cracking live set. A decade has not diminished their ability to deliver.

Machineries Of Joy, BSP's sixth and latest album has the advantage of a degree of familiarity about it. Because we've come to know what to expect from BSP, the subject matter or lyrical content is no longer as peculiar as it might have seemed initially. We are used to the arrangements and the vocals and we have become tuned into a band that have their own distinctive sound. This is not to belittle the new album as more of the same, it is to applaud a band who have successfully ploughed their own unique furrow and who are without equal or imitation in what they do.

The ten song set is beautifully introduced and presented by the initial delicacy of the title track 'Machineries Of Joy'. The track builds with each set of notes as Yan softly sings with the repeated chorus establishing an instant earworm as rampant guitar riffs flit in and out. Ketamine induced hallucinations provide the topic for the altogether more animated 'K-Hole'. BSP do the equivalent of Blur's 'Song 2' with a raucous bundle of electrified and energised fuzz and frenzy with only the odd respite to draw breath. 'Hail Holy Queen' makes great use of strings and dreamy harmonies to embellish and adorn a more sombre song before 'Loving Animals' takes the band back a generation to an Indie heyday populated by the sounds of Joy Division and Magazine. 'What You Need The Most' pulls the band back to base with a stunning song of stripped back beauty. The tender vocal and 'lullaby' score compliment each other wonderfully.

By Jordan Dowling in Music Reviews on 14 February 2011

It speaks volumes of British Sea Powers almost unique position in the current British music climate that they can be labelled as a 'cult' and 'criminally ignored' band and effortlessly reach the Top 40 Album Charts and sell out 500+ capacity venues at the same time. 'Unique' itself is a term that's easy to tag onto the band, one who marry up indie-pop sensibilities, walls of noise and subject matter ranging from world war naval bases to British wrestling references, but for all their idiosyncrasies and eccentricities, not to mention a range of merchandise that offers not only the typical t-shirts and tote bags but mugs and sweets, it is the sheer consistency and quality of the bands five preceding albums, and numerous EPS/singles, that has gained the southern sextet such a following.

British Sea Power don't do small or subtle. They make statement indie, macroscopic music which aims for the stars. It's hardly surprising that the band have played gigs inside the Arctic circle and on top of The Great Wall Of China; for the majority of their career, they seem to have been striving to create songs perfectly suited to just such an occasion, songs which capture man's astonishment and wonder when faced with the beauty of the Arctic or The Great Wall's monumental scale. They haven't always succeeded, because their ambition often outstrips their ability to write memorable songs, but they can't be faulted for trying.

We caught up with Yan, Noble, Hamilton, Phil, and Wood from British Sea Power before their show at Manchester's Ruby Lounge to chat about their new record 'Valhalla Dancehall', bringing back nuclear power, and their desire to play on The X-Factor.

By Michael West in Music Reviews on 21 October 2010

Since their acclaimed debut album was released a distant seven years ago, British Sea Power have displayed a certain vigour for releasing new music that has been more than admirable. The 2009 Mercury Prize nominees have now released two albums and two EP's in the space of four years, with a new long-player geared to hit shelves in February 2011. It's a rich vein of form that probably evokes as much a sense of toil and achievement on their part as it does a worrying inadequacy on the part of the British bands that have failed to follow suit. When revisiting the group's recent output, it becomes increasingly difficult to ignore the vast scope of their work - and let's be clear - this has not been changing direction for the sake of it, or 'adding strings', this is a varied compendium of music by an impressive and often remarkable band. 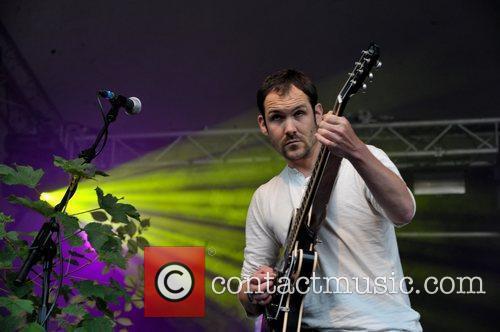