Beach Boys Star Brian Wilson Was Joined Onstage By The Actor Who Plays Him As A Young Man In New Movie Love & Mercy At The Dvd Launch Party On Monday Night (12oct15). 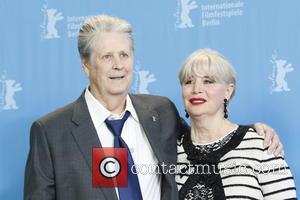 Paul Dano performed Beach Boys classic You Still Believe in Me alongside Wilson and Al Jardine, and told Rolling Stone the jazz club gig was a dream come true.

"Brian asked me to sing that song because he knows it's one of my favourites," the actor explains. "My favourite part was the ending, the communal 'ahhhs' and the feeling of communion up there. It's a really beautiful, intimate song."

Wilson was also joined onstage at the Vibrato Grill in Los Angeles by Jardine's son Matt, who took on lead vocals for the band's performance of another Beach Boys classic, Wouldn't It Be Nice.

Dano's co-star Elizabeth Banks was among the 200 lucky fans who managed to get a ticket for the intimate gig. The Hunger Games star linked arms with Wilson's wife Melinda, who she portrays in the film, for Wilson's tender Love and Mercy finale.