Beach Boy Brian Wilson is one of greatest songwriters that the pop world has ever produced. Their 1966 album 'Pet Sounds' is widely recognised as being one of the greatest pop albums ever made. So when Brian Wilson walked rather unsteadily to his keyboard at London's Royal Albert Hall to perform the album in its entirety, it promised to be one of the most extraordinary moments in pop history because it was said that this would be the last time he would ever play the album live.

'Pet Sounds' has an amazing history. It was fifty years ago that it was released and Wilson - now an astonishing 75 - was so mesmerised by the progressive, revolutionary direction that The Beatles were embracing with their ground-breaking 'Rubber Soul' album, he was determined to produce an even better album than that - in fact he wanted to make the greatest album of all time.

Because of its incredibly advanced studio production, 'Pet Sounds' is a difficult album to play live. But Wilson and his accomplished 10 piece band, which included original Beach Boy stalwart Al Jardine, gave it a great shot and its key songs (including 'Wouldn't It Be Nice', 'Sloop John B', and 'God Only Knows') produced good vibrations amongst the Royal Albert Hall audience who had come to pay homage to the Californian legend.

In fact, watching Brian Wilson is an unsettling experience because of the air of detachment about him. In fact it is a miracle he can compose songs of such majesty and beauty. He is deaf in one ear, has experienced voices in his head for most of his life, veered off course for thirty years into a period of mental problems, LSD experimentation and nervous breakdowns.

'Pet Sounds' marked a huge change in the Beach Boys' direction as it was waves away from the fun songs about hot rods, surfing and California girls that had catapulted the band onto the world stage. 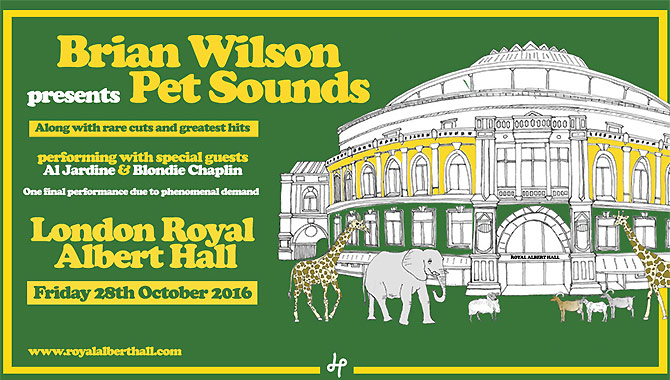 It would have been too intensive an experience for Wilson to have just performed this album solely so it was bookended by all the happy, frothy songs in the Beach Boys canon. The audience were treated to such pop gems as 'I Get Around', 'Fun, Fun, Fun', 'California Girls', 'Little Deuce Coupe' and 'Help Me Rhonda'. Added to this were Beach Boys masterpieces 'Heroes and Villains' and 'Good Vibrations'.

The only bad vibration of the evening was the price of the tickets; my seat cost £150 and that must have been the only reason for a number of empty seats littered throughout the venue which was a shame because this was a concert that anyone interested in the magic of pop and its unique and amazing history should have had on their bucket list. You will never experience anything of its kind again.