Review of No Pier Pressure Album by Brian Wilson

Brian Wilson's solo back catalogue has been an impressive re-imagining of the distinctive song writing that catapulted The Beach Boys to success half a century ago. The 72-year-old's eleventh studio recording under his own name does little to change that formula. The thirteen tracks here work hard to embrace the past, re-uniting Wilson with Al Jardine, while introducing more contemporary contributors to the mix. For the most part, it's a successful collection that is unmistakeably Wilson at his laid back best. 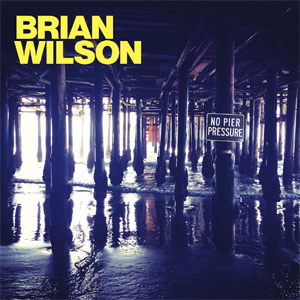 The playful album title, 'No Pier Pressure', seems to suggest that Wilson doesn't feel motivated to emulate the latter day triumphs of artists like Johnny Cash, Bob Dylan and Leonard Cohen. Instead, he's content to play in his own sandbox and explore the possibilities of his favoured vocal harmonies. It's a record that manages to simultaneously be full of nostalgia and is musically a world away from pop music in 2015, while embracing some of the most recognisable voices in the charts. It's an interesting approach that doesn't always pay off, but it doesn't detract from the feel-good sun-drenched hallmark sound of Wilson's music.

The duets that really work are those with Kacey Musgraves and Fun. vocalist Nate Ruess. The former called 'Guess You Had To Be There' nods to Mugraves Country roots with the inclusion of a banjo that broadens Wilson's typical Californian sound. It's a weird fusion of two musical styles that works well thanks to the warmth of Wilson's harmonies. Equally, Ruess' lead vocal on 'Saturday Night' emphasises the innocence and teenage sentiment of the lyric. Crucially, both of these collaborations broaden the appeal of 'No Pier Pressure' beyond the nostalgic tone that prevails elsewhere.

While Musgraves and Ruess complement the material, some of the other artists seem more of an awkward fit. While I like Zooey Deschanel's performance for 'On The Island', the Caribbean cabaret vibe seems a little whimsical and feels more like Wilson is contributing to her song, rather than the other way around. This problem is most significantly felt during 'Runaway Dance', which uses Sebu Simonian as a guest vocalist. It's all processed vocals and dance floor beats with a giant pop chorus. It feels completely separate from the rest of the record, but as it's the second track, you're left with a creeping sense of doubt as the album progresses as to whether more oddities in the same vein will follow, thankfully they don't.

In truth, the strongest moments recall Wilson's classic song writing. For example 'Sail Away' brings to mind 'Sloop John B'. While I hold reservations about some of the guest contributions, it is a shame that Lana Del Rey's planned appearance didn't happen on the best track here, 'The Last Song'. I have a feeling it would have provided the key moment to propel 'No Pier Pressure' into the territory of being an album that defines Wilson's latter-day career. Instead, it's a record that has broad appeal, and a handful of great songs; it's fun, but certainly not essential.