Posted in Press Releases on 05 November 2012 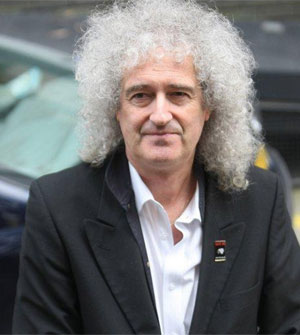 Today sees the worldwide release of the Oscar-winning song 'Born Free' re-recorded by legendary Queen guitarist Brian May and West End and Broadway songstress Kerry Ellis. The classic hit single will be sold in aid of international wildlife charity, the Born Free Foundation.

'Born Free' was first recorded by Matt Monro in 1966 as the title song to the classic wildlife film of the same name, starring Virginia McKenna OBE and the late Bill Travers, which told the story of George and Joy Adamson's successful release of Elsa, an orphaned lioness, to the wild. Inspired by their experiences in Kenya, Virginia and Bill went on to establish the Born Free Foundation.

The music and lyrics to 'Born Free' combined the extraordinary talents John Barry (Out of Africa, Dances with Wolves) and Don Black (Diamonds are Forever, The Man with the Golden Gun), collaborators on some of the most enduring film scores of our time. With May's driving guitar riffs and Kerry's power-packed vocals, this is very much a new and exciting evolution of 'Born Free' the song.

Brian said; "We paid a lot of respect to this iconic song and were fortunate to have Don Black himself write some special new lyrics as we put our own mark on this awesome and moving track. We hope that people will really like what we have done and that it will contribute to the long-lasting legacy of this great piece of music."

'Born Free' is widely recognised and loved all over the world and has been covered by some of the greats such as Frank Sinatra and Andy Williams.

The single was recorded by Brian and Kerry following a recent visit to South Africa to see the work of the Born Free Foundation first-hand.  There they were involved in the relocation of two rescued lions at the Born Free Centres at the Shamwari Wildlife Reserve and went on to perform at the launch of Pride of Cape Town, a massive public arts exhibition of fibreglass lions, scheduled for Spring 2013.

Kerry said; "Seeing Born Free's invaluable welfare and conservation work to help  Africa's lions really moved us to re-record a song which means so much to so many people. We hope we have done it proud and that the funds raised by the downloads will help the charity continue to protect fragile populations of lions in the wild."

Throughout the years 'Born Free' has remained an enduring anthem that magically tugs at the heart strings; a powerful legacy of a film that told the story of a lioness named Elsa and her journey to freedom, made possible by two great conservationists, George and Joy Adamson.

The release of the single ties in with Brian and Kerry performing a series of intimate UK concert tour dates, also in support of the Born Free Foundation (for full listing of dates see below). The single is accompanied by a powerful promotional video focussing on the plight of lions, filmed in South Africa by the award-winning director Mike Slee (Flight of the Butterflies, 2012) and featuring Virginia McKenna.

Virginia is clearly delighted by this new version and said, "Born Free is re-born! Brian, Kerry, and Don have brought a new energy and a new meaning to a song, known and loved all over the world. Mike has made a magical film. If Born Free can touch the hearts of a new generation then maybe there is still time to save Africa's wild lions.  How fortunate we are at Born Free to receive this priceless support from people such as Brian and Kerry  who share our deep concern and love for wild animals and their place in the world."

Members of the public are urged to alert the global online community about the song and to sign Born Free's online petition where they can pledge their support for lion protection and conservation. Visit www.bornfree.org.uk/bfsingle

Available in three formats, including a large-scale production and acoustic version, the 'Born Free' single is a digital only release and is available Monday 5th November to download, the day May and Ellis start their 11-