Brian May Pays Tribute To Mercury On His 65th Birthday 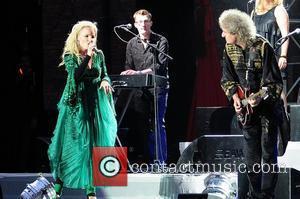 Rocker Brian May has paid a touching tribute to his late Queen bandmate Freddie Mercury on what would have been his 65th birthday.
The rock legend, who died in 1991 from Aids-related pneumonia, would have turned the landmark age on Monday (05Sep11), and to mark the occasion, guitarist May has written a special blog about the flamboyant star.
In the message, May details how he met Mercury, writing, "I was first introduced to Freddie Mercury, a paradoxically shy yet flamboyant young man at the side of the stage at one of our early gigs. He told me he was excited by how we played, he had some ideas and he could sing! I'm not sure we took him very seriously, but he did have the air of someone who knew he was right."
And the rocker insists the late star is still relevant today, poignantly adding, "Freddie would have been 65 this year, and even though physically he is not here, his presence seems more potent than ever.
"Freddie made the last person at the back of the furthest stand in a stadium feel that he was connected. He lived life to the full. He devoured life. He celebrated every minute. And, like a great comet, he left a luminous trail which will sparkle for many a generation to come. Happy birthday Freddie!"