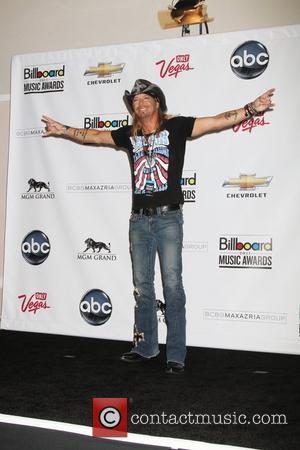 BRET MICHAELS and his Poison bandmates are facing a lawsuit from the former members of a Chicago, Illinois-based rock group over allegations of copyright infringement dating back to the 1980s.
Billy MCCarthy and James Stonich, who were members of now-defunct band Kid Rocker, filed a lawsuit in Illinois federal court on Wednesday (19Oct11) alleging some of their songs were incorporated into Poison tracks including Talk Dirty To Me and I Won't Forget You.
The lawsuit alleges guitarist C.C. DeVille auditioned for Kid Rocker in 1984 before he joined Poison and he was given a number of the band's studio tapes.
MCCarthy and Stonich suggest their work was subsequently used by Poison and they are suing the band, along with executives at Capitol Records and Emi Music, for allegedly infringing the copyright on their songs.
They are demanding profits from the songs in question along with statutory damages and an injunction to prevent Michaels and Poison from performing the tracks, according to The Hollywood Reporter.