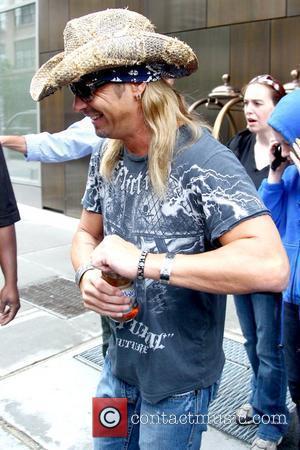 BRET MICHAELS has emerged as the new favourite to replace Simon Cowell as an American Idol judge after his triumphant performance on the live finale of the talent show on Wednesday night (26May10).
The Poison singer ignored his doctors' advice and took to the Idol stage for a duet with finalist Casey James.
The ailing rocker, who is still recovering from a near-fatal brain haemorrhage and a recent stroke, was an instant hit with fans, who gave him a standing ovation as he walked out to sing a rendition of Poison's Every Rose Has Its Thorn.
And Cowell was left so impressed he's considering handing him his judging seat now that the Brit has quit the show after nine years on the panel.
He says, "Actually, he'd be good. He's funny. He's got experience. He'd be a good choice - and you saw the audience reaction to him. They love him."
And Michaels is hopeful he will be handed the job: "I'm sorry he (Cowell) has to go but sometimes things happen. Provided my health holds up, I think I'm taking that chair next year!"
Other celebrities who have been linked to the role include Quincy Jones, DJ Howard Stern, Madonna's partner and record boss Guy Oseary, Idol host Ryan Seacrest, Harry Connick, Jr. and the show's former judge Paula Abdul.