Bradley Cooper and Chris Martin were just some of the famous faces watching Pharrell Williams perform at Glastonbury Festival this evening (27.06.15). 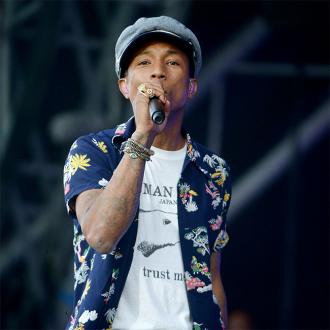 The 'Happy' hitmaker took to the Pyramid Stage at Worthy Farm, Somerset as celebrity guests watched on from the side of the stage.

Also in attendance with the 'American Sniper' star was a mystery woman whilst Stella Mccartney and her daughter were spotted having a good time.

Yesterday's headliner Florence Welch, from Florence and the Machine, also partied with the 42-year-old record producer as well as Formula One star Lewis Hamilton.

He told the excited crowd: ''You guys are awesome - thanks so much.

''England thank you for making it such a special night.''

And before performing his track 'Marilyn Monroe', he paid tribute to the ''beautiful women'' in attendance.

He added: ''One thing about when you go to England, you definitely meet the world's most beautiful women.''

Earlier in the day, fashion designer Stella shared a snap of her and the 'Get Lucky' hitmaker.