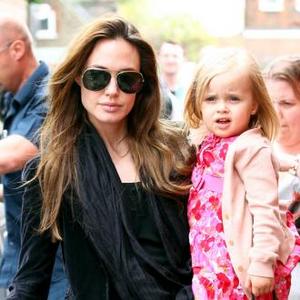 The four-year-old tot is set to follow in her parents' footsteps after Angelina helped her get her first acting gig, playing her on-screen daughter in 'Maleficent'.

A source told The Sun newspaper: ''Ange thought it would be a fun experience for her and Viv to share, and Viv is a natural.

''The other kids are now nagging Ange and Brad to land them roles.''

'Salt' actress Angelina persuaded producers that her daughter was perfect for the role of young Princess Aurora in the reworking of classic fairytale 'Sleeping Beauty'.

However, this is not the first time that one of their Offspring has graced the big screen.

Shiloh had a cameo role in 'The Curious Case Of Benjamin Button' as Brad and Cate Blanchett's daughter when she was 10 months old.

Vivienne will be filming scenes with Angelina in the UK this summer, and 'Maleficent' is scheduled for release in 2013.