Red carpet prankster Vitalii Sediuk says his controversial antics are all done in the name of ''entertainment''. 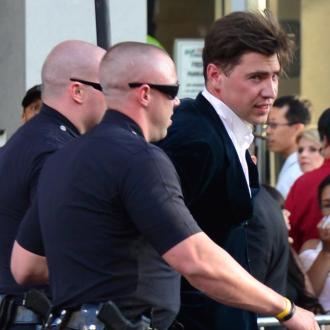 Brad Pitt's attacker insists he is a ''normal'' person.

Vitalii Sediuk scaled a barrier at the Hollywood premiere of 'Maleficent' last week to reach the actor and has previously accosted stars including Bradley Cooper, Leonardo DiCaprio and Will Smith at red carpet events but insists his ''controversial'' antics - including attempting to put his head up America Ferreira's dress - have all been done in the name of ''entertainment''.

In an interview with Mario Lopez for 'Extra', he said: ''I am a different guy who thinks differently and has this entertainment spirit that probably people in Hollywood never experienced before.

''It's something different, controversial, extraordinary and it's hard to explain. I'm normal, at least I believe so.''

The 25-year-old former journalist went on for causing ''inconveniences'' to his celebrity victims and for taking the spotlight away from their events.

He added: ''I apologise for inconveniences that I created to many celebrities dealing with my style of entertainment... I feel sorry that I create inconveniences for Brangelina family because I knew there were no kids around, but they were at the premiere, and I kind of stole the spotlight from such an important moment.''

Following the incident with Brad last week, the actor secured a temporary restraining order against Sediuk, who was also placed on three years probation after he pled ''no contest'' to battery and unlawful activity charges stemming from the attack.

And the Ukrainian has vowed to take his punishment seriously.

He said: ''I wouldn't joke with the judge and I took them seriously because one thing you do for entertainment and other thing, when you have legal problems, and I have to tell you they're so many consequences I experience now.''