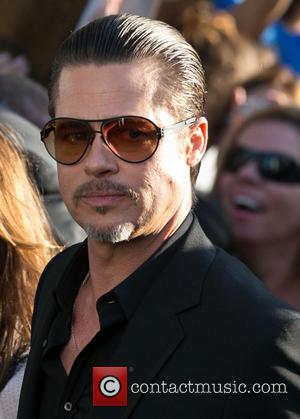 The Ukrainian journalist behind a series of red carpet pranks targeting the likes of Brad Pitt and Will Smith has apologised for upsetting Hollywood's biggest stars.

After grappling with Pitt during the Los Angeles premiere of Maleficent last week (28May14), Vitalii Sediuk was slapped with a restraining order and battery and assault charges.

On Friday (30May14), the 25-year-old reporter was sentenced to 20 days of community service, 36 months of probation and ordered to pay $220 (£138) in fines, while a judge also barred him from attending any future Hollywood events.

He sat down for his first U.S. interview on Monday (02Jun14) with Extra host Mario Lopez and tried to explain why he chose to pull bizarre stunts at high-profile events.

Sediuk said, "I am a different guy who thinks differently and has this entertainment spirit that probably people in Hollywood never experienced before. It's something different, controversial, extraordinary and it's hard to explain. I'm normal, at least I believe so.

"I apologise for inconveniences that I created to many celebrities dealing with my style of entertainment... I feel sorry that I create inconveniences for (the) Brangelina (Pitt and Angelina Jolie) family because I knew there were no kids around, but they were at the premiere, and I kind of stole the spotlight from such an important moment."

As for Friday's sentencing, Sediuk added, "I wouldn't joke with the judge and I took them seriously because one thing you do for entertainment and other thing, when you have legal problems, and I have to tell you they're so many consequences I experience now."

In addition to his run-in with Pitt, Sediuk previously had red carpet encounters with Will Smith and Leonardo DiCaprio, and attempted to scramble under America Ferrera's gown on the red carpet at the Cannes Film Festival in France last month (May14).

He was also arrested at the 2013 Grammy Awards after he attempted to grab Adele's Best Pop Vocal prize from presenter Jennifer Lopez.