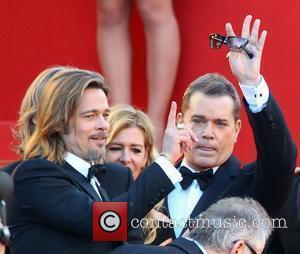 Brad Pitt's younger brother called the actor for advice before signing on to shoot a new advertisement for Sir Richard Branson's Virgin Mobile company in Australia.
Photojournalist Doug Pitt, who is three years younger than his Hollywood star sibling, invites viewers into his modest suburban home to give them insight into how the "second most famous Pitt" lives in the quirky ad, designed to poke fun at the disparity between the two brothers' lifestyles.
And the 45 year old admits he sought permission from the Moneyball star before committing to the project, even asking for acting tips on how to improve his onscreen performance.
Doug says, "He's been in this game 25 years and I've never stepped in and so when this came along... I thought what Virgin Mobile Australia came up with was creative, so I did call him and said, 'What do you think?' And he said, 'Do it, it sounds great!'"
The commercial has already gone viral and Doug reveals his famous brother has since given him the thumbs up, adding, "He did (see it), I was out riding my bike and I stopped and got a text and he said, 'Hey, just saw it. Hilarious.' So I was pleased."