In the romantic thriller Allied, Brad Pitt and Marion Cotillard play spies who fall in love with each other then face a crisis of trust. The setting is a familiar one for Pitt ("Yeah, I do seem to end up in a few World War II films as of late!"), who first heard about the project several years ago while he was making World War Z in England. 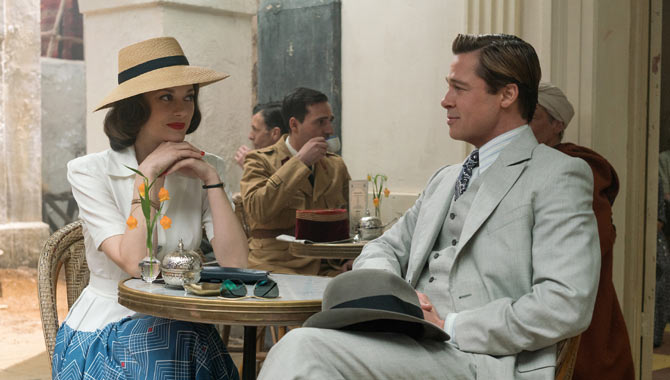 "I had a meeting with screenwriter Steven Knight, and he began to tell me the story before he had written it," Pitt says. "I got really intrigued by this idea of a couple and trust - trusting your instinct, trusting each other, trusting the mission. And it was based on members of his family. Many years later, here we are, and it's nice to see this thing come full circle."

Once production began, Pitt particularly enjoyed the fact that much of it was shot on film sets. "It was a throwback to the old '40s films where you'd be in stationary car and you'd see a rear projection," he laughs. "That was the most fun to me, to approach this film like the old '40s films but using the new technology, and that's something [director] Bob Zemeckis had his arms around right from the beginning. And also, because we didn't always have to travel to distant locations, the hours were shorter!"

Watch the trailer for 'Allied' here:


The biggest challenge for Pitt was sounding fluent in French while co-starring opposite native speaker Cotillard. "I say I'm going to get this language, but it may take a lifetime," Pitt says. "I know there are certain synapses in my brain that just freeze dead at French."

And there was also the issue that his marriage to Angelina Jolie broke down only a few months before Allied's release, which put Cotillard on the spot with the press.

In a long-term relationship with actor Guillaume Canet, with whom she is expecting a second child, she refused to enter the fray. "I didn't take it personally because I had nothing to do with those rumours or situations," she says. "I don't give energy to this. It was a wonderful, wonderful experience working with such an amazing actor, so that's all that matters."

More: Read our review of 'Allied'

And like Pitt, she felt that the best thing about Allied was how much it reminded her of her favourite American movies from the '40s and '50s. "It was like diving, in a way, into my childhood dreams," she says.