Brad Pitt has joked that he considers himself to be an ''old man''. 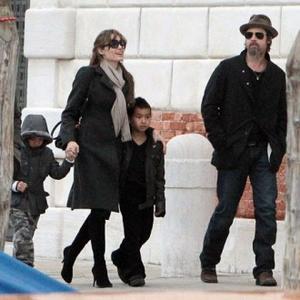 Brad Pitt considers himself to be an "old man".

The `Moneyball' actor recently injured his knee after falling down a hill while carrying his three-year-old daughter Vivienne, and although he now has to use a cane to walk, he insists the incident wasn't a "life or death" matter.

Speaking about The Fall, he told People.com: "It wasn't life or death. It was just an old man tripping. It's not too bad."

The 48-year-old star - who also raises Maddox, 10, Pax, eight, Zahara, six, Shiloh, five, and Vivienne's twin brother Knox, with partner Angelina Jolie - previously admitted he put his own body on the line in order to protect his daughter during the tumble.

Brad said: "I was carrying my daughter Vivienne down the hill and I slipped. It was either her or me."

However, Angelina admitted the couple are constantly suffering injuries while caring for their Offspring.

She explained: "I think all parents get injured in the line of fire. When Maddox was young, I fell and hurt my Elbow. It's a pretty Common occurrence."