A Beverly Hills jeweller has claimed he designed an engagement ring for Angelina Jolie, commissioned by her partner Brad Pitt. 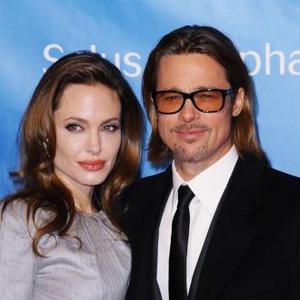 Robert Procop - former CEO of Asprey & Garrard, the British jewellers favoured by the Royal Family - claims he was asked by Angelina's partner Brad, with whom she raises six children, to design The Ring.

A representative for Robert told The Hollywood Reporter: ''I can confirm that, yes, Robert Procop did indeed design an engagement ring for Angelina Jolie, designed in collaboration with Brad Pitt.''

Although Brad and Angelina - who has previously claimed they will not marry until same sex marriages are legalised - have not confirmed their engagement, Robert revealed he and the 'Moneyball' actor worked on the ring together for a year.

He explained: ''Brad had a specific vision for this ring, which he realised over a yearlong collaboration. He wanted every aspect of it to be perfect, so I was able to locate a diamond of the finest quality and cut it to an exact custom size and shape to suite Angelina's hand. Brad was always heavily involved, overseeing every aspect of the creative design Evolution. The side diamonds are specially cut to encircle her finger. Each diamond is of the highest gem quality.''