Brad Pitt has bought Angelina Jolie a £250,000 shooting range as a wedding present. 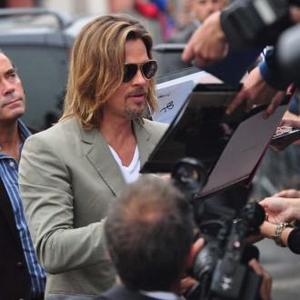 Brad Pitt has splashed out on a £250,000 shooting range as a wedding present for Angelina Jolie.

The couple are set to tie the knot at their French estate Miraval later this year and Brad installed the range and an armoury on site as a gift for his bride-to-be.

A source told The Sun newspaper: ''Brad had a lot to live up with his wedding gift considering Angelina exchanged vials of blood with her ex-husband Billy-Bob Thornton.

''But Ange clearly finds shooting an aphrodisiac. When she and Brad were around weapons on the set of 2005's 'Mr & Mrs Smith' they ended up together.

''And by letting Angelina de-stress at the range, he's less likely to get earache indoors. There's a lot to be said for that when you have six kids.''

It's no surprise Brad is pulling out all the stops as it was recently claimed that Angelina has invited her ex-husbands Jonny Lee Miller and Billy Bob to the wedding.

A source said: ''Angelina has remained close to both Jonny and Billy so they'd certainly be invited.''

While Brad doesn't seem to have any objections to the guests, sources say he has been having a ''nightmare'' with making sure the estate is ready in time for the nuptials.

An insider explained: ''Brad has been doing most of the wedding planning and has been having a nightmare with refurbishments at the chateau. Angelina has left it pretty much up to him and the kids who are really excited.''