Brad Pitt and Angelina Jolie are building an underground, solar-powered Theme Park for the six children they raise together. 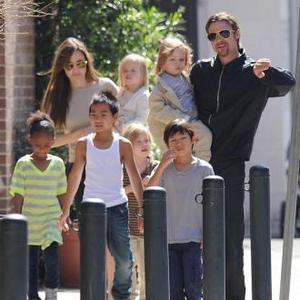 Brad Pitt and Angelina Jolie are building an underground, solar powered Theme Park for their children.

The couple - who raise kids Maddox, 10, Pax, nine, Zahara, seven, Shiloh, five and three-year-old twins Knox and Vivienne - are planning to create a recreation space for their brood at their home in the south of France which will be powered by the rays of the sun.

A source told The National Enquirer magazine: ''Plans include a massive pool, slides, tunnels, boat rides, a pirate island with a castle, a go-kart track and even an old-fashioned carousel.

''Most of the park will be underground, with turf on top. It will be powered by sunlight, using panels in the roof and the water will be recycled.''

Oscar-nominated Brad may even get one of his children to help in the park's construction - as he has previously revealed he wants one of the children to become an architect.

He said: think I got one [into architecture]. Yeah, I'm pushing them that way. When you see them drawing crayon houses, 'That's a beautiful house, honey.' Just keep pushing them.''