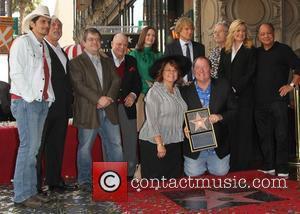 Brad Paisley, Billy Ray Cyrus and Miranda Lambert are among the stars who have paid tribute to bluegrass icon Earl Scruggs following his death on Wednesday (28Mar12).
The musician, who was credited with elevating the banjo from a comedy prop to a lead instrument, passed away at a hospital in Nashville, Tennessee at the age of 88, and musicians have been taking to their Twitter.com pages to remember the legend.
In a post, Paisley writes, "Rest in peace Earl Scruggs. Thanks for being one of our musical Thomas Edisons", while Chris Young adds, "Rip Earl Scruggs... legend."
Referencing Scruggs' most famous songs, Cyrus ‏adds, "Turnin the banjo up on hillbillyheart and stomp in honor of Earl Scruggs. 'Ready... Set ...don't go'. You're right about that! Thank you. I still say... 'Hillbilly Heart' and 'Stomp'. Banjo up mix in honor of Earl."
Chely Wright ‏declared, "Rest In Peace, Earl Scruggs. A member of a lovely, talented family", while Lambert shared with fans, "God bless the family. Especially his son Randy. My dear friend. Praying for y'all."