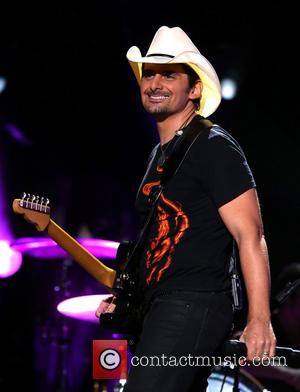 Country star Brad Paisley and his wife Kimberly Williams have revealed they became victims of an internet hoax, after a fan conned them into thinking her young daughter was dying of cancer.

The actress received an email from a woman named Carrie Kahler, who claimed her daughter Claire was suffering from neuroblastoma, a form of pediatric cancer.

Kahler told Williams that her daughter had "begged" her to get in touch with the actress, since she had written a fan letter to her and wanted to ensure that Williams received it.

In an interview with U.S. news show Nightline, Williams says Kahler was adamant she didn't want anything from her or her superstar husband, so she decided to give the Kahler and her daughter a call.

After their chat on the phone, Williams admits, "I cried. It was very painful. The emotional rollercoaster was very tough and I called Brad and I said, 'I can't talk to her right now anymore. Can you call and sing?'"

Paisley graciously agreed and played a few songs for Carrie and Claire over the phone, including Amazing Grace.

For 10 days, the relationship between the Paisleys and Kahler and her daughter continued through phone calls and emails - and the couple even received songs Claire allegedly recorded for Williams.

Paisley adds, "I thought in the middle of it, 'There's no way this can't be real. You're singing to someone's dying kid'."

When Carrie called to let the couple know that Claire had passed on, Williams inquired where they should send flowers for the funeral, and the fan's response set off warning bells.

Williams recalls, "She said, 'Oh, don't (send flowers). Just send a donation to your local children's hospital.' I mean I had, like, a physical reaction. Every red flag went up. And I remember just looking at people around me... 'Who is it? How many people were involved in this scam? And are they right here, are they watching me right now?'... This person was crazy."

Paisley has now made it his personal goal to track down the woman behind the scam, adding, "I watched my wife buckle when she realised this wasn't a real girl and I vowed that night, 'I'm going to find her and make sure this person isn't able to do this (again)'."