Brad Paisley Talks ‘Accidental Racist’ on Jay Leno: "Something Good can Come of This"

Accidental Racist has proven to be a real headache for Paisley

It’s been a week of explaining for Brad Paisly, whose ‘Accidental Racist’ song has, accidently (sweet irony noted) caused loads of controversy. Most recently, he’s been explaining to Jay Leno what it’s all about.

“What we're trying to do is explore what happens when two people have a dialogue," Paisley said. "The entire album Wheelhouse is meant to touch on some themes that I think aren't normally touched on in music, and in the context of the album, the song makes a little more sense." See, some people have a problem with the song’s content, other people are dismayed by just how bad it is, and others think his brand of country hip hop is just awful. And although he sees people have misinterpreted the song, he said he hopes that "something good can come of this,” adding” "We don't expect to get the answers in this song," Paisley said. "It's not perfect, but it is honest, and it comes from a good place." It would appears as though last year’s Oscars winners were the influence for this song. "Racism has been on my mind," he says. "Last year, we had some really powerful movies deal with it really well. We had Django [Unchained] and Lincoln, and the media deals with it all the time, and I thought maybe it would be an interesting conversation between country music and rap music to deal with this subject between two individuals in a loving and understanding way." 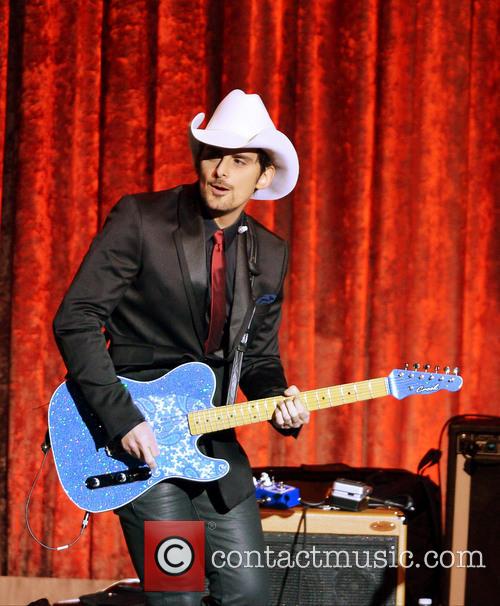 Paisley wearing a bad suit and a bad hat, holding a guitar. A bad guitar.

Paisley reckons he "wouldn't change a thing" about Wheelhouse, which came out Tuesday. Although he sounded less convinced when Leno asked, "Would you do it over again?" to which he replied, "You know what, I don't know. I guess so."