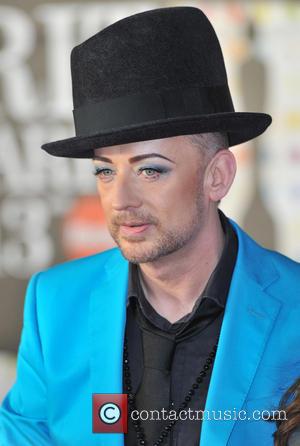 Boy George has fuelled his war-of-words with One Direction star Liam Payne by branding him a "twit" who deserves to be punched.

The former Culture Club frontman took aim at Payne following the BRIT Awards last month (Feb13) where they clashed as the singer tried to get a photo of Payne's bandmate Harry Styles for his niece.

He blasted Payne online and called his security guard a "w**ker", prompting the pop star to hit back by accusing the Karma Chameleon hitmaker of telling lies, adding, "U (You) just keep wearing ur (your) strange hats and enjoy yourself my little Georgie pie... It's still not cool you just look weird."

Now George has stepped up the feud, posting on his official Twitter.com page, "I had no idea that twit Liam had made some dig about my hat! Lucky I'm a Buddhist or I'd crack (punch) the t**t!"