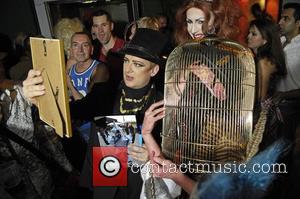 Boy George has reached out to troubled singer Amy Winehouse to offer support in her sobriety battle.
The Karma Chameleon hitmaker struggled for years with an addiction to drink and drugs but has been sober for more than two years and now wants to counsel Winehouse.
He recently took to his Twitter.com page to post a video of Winehouse's shambolic performance in Serbia earlier this month (Jun11), where the seemingly drunk singer stumbled around and slurred her songs.
The former Culture Club frontman described the clip as "truly heartbreaking stuff" before 'tweeting' to the Rehab hitmaker: "Come to a meeting babe, do you know how loved you are?"
He later added, "Step 1 is all about that realization, I hope I don't sound judgmental, I'm really not!... I don't know why people put it on YouTube. I would just go home and cry."
Winehouse axed her entire comeback tour after the footage aired, with a representative telling fans she will not be taking the stage again until she can "return to her best".