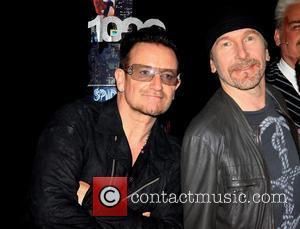 A performer in Bono's rock musical Spider-Man: Turn Off The Dark was left seriously injured on Thursday (15Aug13) following an onstage accident.

Dancer Daniel Curry's leg became hooked in a stage trap door as the elaborate set was moved at the beginning of the second act at Broadway's Foxwoods Theatre.

Aides rushed to help and a hole was cut in the floor in a bid to release his limb. Curry, 23, who plays one of nine Spider-Man dancers in the show, was then carried out on a stretcher and taken to Bellevue Hospital in New York. The performance was immediately cancelled.

Audience member Melissa Kessler tells the New York Times, "The floor looked completely closed on his leg... A stretcher was brought out, they were using a saw to cut a hole in the stage floor. All we cared about was whether the actor was and would be O.K."

No further details of his condition were available as Wenn went to press.

It is the latest in a long line of accidents which have blighted the highly technical show.

Performer Christopher Tierney narrowly cheated death when he fell from an onstage platform in 2010, and subsequently underwent treatment for injuries including broken ribs, a fractured elbow, a bruised lung, three fractured vertebrae and a cracked skull, while he also endured back surgery and months of subsequent rehabilitation treatment.

The musical features a score by U2 stars Bono and The Edge.