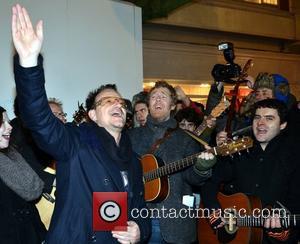 Bono's teenage daughter EVE HEWSON is dating One Tree Hill hunk James Lafferty, according to a U.S. report.
Actress Hewson, 19, and Lafferty, 25, were spotted getting close as they watched the Leopardstown Horse Races with the U2 frontman and his wife Ali from their private box in Dublin, Ireland on Tuesday (28Dec10).
A source tells JustJared.com, "They looked adorable together. Eve kept whispering in James' ear and they exchanged a few kisses."
Another insider tells the website the stars have been together since at least last month (Nov10), adding, "James and Eve were making out at a recent concert for Brooklyn-based alternative/rock band Wakey Wakey held at Maxwell's, Hoboken, New Jersey, on November 20. They hung out... with friends after the concert."