Bono To Present Award To Famed Activist In Native Ireland 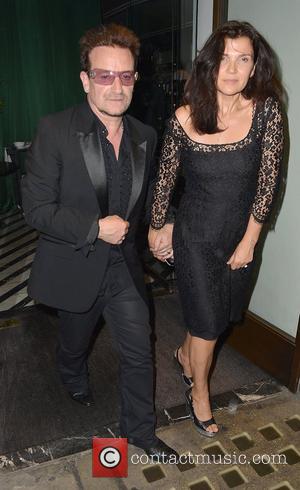 U2 star Bono is set to present famed activist Aung San Suu Kyi with a distinguished human rights award when she visits his native Dublin, Ireland next month (Jun12).
Myanmar opposition leader Suu Kyi was honoured with Amnesty International's Ambassador of Conscience trophy in 2009, but she was unable to pick up the accolade in person as she was serving time under house arrest for behaviour Burmese officials had deemed was "likely to undermine the community peace and stability" of the country.
However, the brave politician will finally have her chance to shine on 18 June (12) and longtime supporter Bono is thrilled about handing her the much-deserved prize.
He tells the Associated Press, "It's so rare to see grace trump military might, and when it happens we should make the most joyful noise we can. Aung San Suu Kyi's grace and courage have tilted a wobbly world further in the direction of democracy. We all feel we know her, but it will be such a thrill to meet her in person."
During her visit, Suu Kyi will also be feted at Irish tribute concert Electric Burma, where she'll be celebrated by folk star Damien Rice, the Riverdance troupe, actress Vanessa Redgrave, and Live Aid guru Bob Geldof, who can't wait to perform in her presence.
He says, "(She is a) heroine of dignity, integrity, courage and steely moral vigour (who) lost her freedom and her family in order to gain a nation. Ireland is ennobled by her visit."
Bono, who has yet to meet the 66 year old, dedicated a series of U2 concerts to Suu Kyi in 2009 in a bid to create awareness about her plight. She was released from home confinement the following year (10).