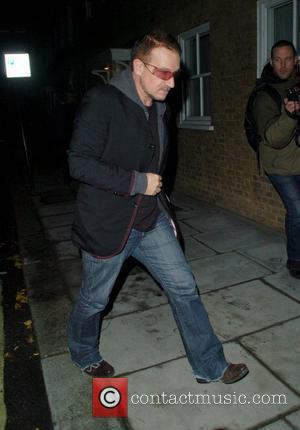 Picture: Bono leaving a private party, held at the home of Barclays senior executive Roger Jenkins, at 330am The event was to raise money for the...

Irish rocker Bono has been awarded the annual Nobel Man of Peace prize for his efforts to combat poverty, debt and disease in Africa.
Paris Mayor Bertrand Delanoe hosted the award ceremony in the city on Friday (12Dec08), honouring the U2 frontman for his global campaign to persuade rich nations to lend assistance to the struggling continent.
Bono told the crowd, which included fellow Nobel laureates, "This is a very big award for me, because let's be honest this is as close as I am going to get - as close as a rock star is ever going to get to the Nobel Peace Prize.
"I am an over-awarded, over-rewarded rock star. You are the people who do the real work.
"So I am very, very pleased to be in such esteemed company."
Italian co-host Walter Veltroni, added, "We decided to nominate a man who has given a lot and will continue to give a great deal to the struggle for human rights, to the fight against poverty, with his music and with his words.
"He has put pressure on the world's governments to reach the UN's Millennium Goals. To give him the prize, is to say that fight will carry on."
U.S. actors George Clooney and Don Cheadle were awarded the prize last year (07).