The (RED) campaign was set up by Bono to raise money to tackle AIDS.

Almost exactly a year to the day since he seriously injured his arm in a bike accident in New York, U2 singer Bono will be auctioning a bicycle ride as part of a charity campaign for his organisation (RED), which raises money to tackle AIDS.

The campaign launches on Tuesday (December 1st), which honours World AIDS Day, according to the Associated Press. It can be entered by donated at least $10 through the Omaze website, and the winner will get to accompany the iconic frontman on a bike ride through New York’s Central Park, where he injured his arm so badly it required surgery this time last year. 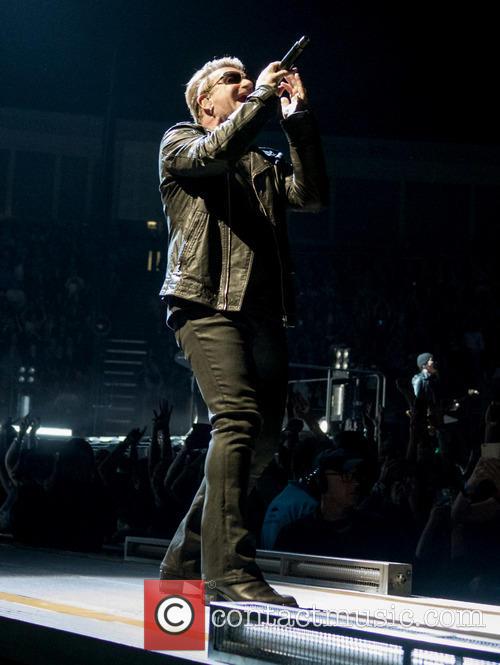 Bono performing with U2 on their recent world tour

“I'm not sure that was as funny to my band as it was to me,” Bono reflected, “but I think we're going to have fun, and yeah, we'll go visit the scene of the crime.”

(RED) is also auctioning off a number of other “experiences” with a variety of celebrities as part of a campaign called Shopathon. Talk show host Jimmy Kimmel, who is dedicating his Tuesday night episode to the charity, and he’s offering himself to give somebody’s kid “the talk”. Let him explain…

“There's no age limit - if you have a 45-year-old kid, I'll explain it to him, too, as long as the parents are OK with it! I'm happy to do the job,” said Kimmel, who starred in a promo video for the campaign with Scarlett Johansson and Barry Manilow.

Other experiences that can be won include a guest tour around the set of ‘Game of Thrones’, a makeover with Kim Kardashian, a portrait painting by James Franco, a red carpet meeting with Meryl Streep, and – possibly best of all – taking part in “legal relaxation” with Snoop Dogg…

“Even though red is the colour of emergency, there's a sort of optimism about the whole campaign and a kind of defiant humour. We have always had that, but the (SHOPATHON) will really take it to another new level,” Bono said.