Rocker Bono Has Reportedly Landed A New Role As A Special Advisor To Bosses At A Top Venture Capitalist Firm. 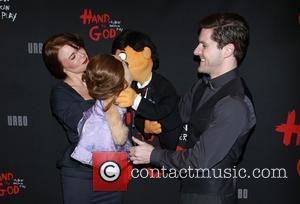 Picture: Avenue Q cast, Kate Monster, Stacie Bono, Princeton and Seth Rothberg - A host of celebrities were photographed as they arrived to the Opening night...

The U2 star has been recruited by executives at TPG Capital to help maximise investments for a new growth fund, which is aiming to raise $3 billion from investors.

Bono has a history with TPG - he is close friends with founder and managing partner William E. MCGlashan, Jr. and has previously poured millions of his own money into the firm's car-pooling service app Ride.

He also co-founded his own venture capital company, Elevation Partners.

Executives at TPG have also established a "strong working relationship" with Sound Ventures, a new investment firm from Ashton Kutcher and U2 and Madonna's manager Guy Oseary, according to the New York Post.