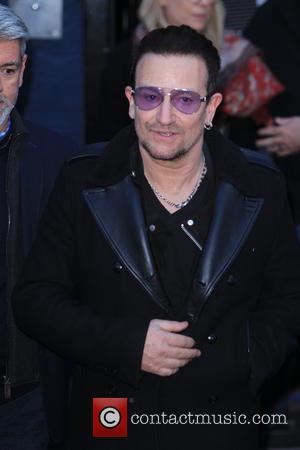 Picture: Bono - Celebrities arrive at Sarm Studios to record the Band Aid 30 single 'Do they Know It's Christmas.' The new Band Aid 30 song...

Singers Bono and Robin Thicke have been named two of the Least Influential People of 2014 by America's GQ magazine.

Editors at the U.S publication have compiled a list of the 30 stars they believe are uninspiring to the general public, noting that this batch of people "took up vast clouds of oxygen, gave us back nothing of use, and probably helped accelerate the death of our planet."

Rocker Bono and his band U2 were criticised in September (14) for releasing their Songs of Innocence album exclusively through iTunes - the record was installed into nearly 500 million users' music libraries automatically.

Gq editors slammed the band for using the stunt as "some kind of noble gift to The People", and added, "This was a $100 million marketing campaign. Yes, $100 million to turn U2's socially conscious dad-rock into a piece of direct mail."

R&B singer Thicke had a rough 2014 after his actress wife Paula Patton filed for divorce - he staged a failed attempt at winning her back by dedicating his latest album, titled Paula, to her.

The publication's editors wrote, "The rest of this cheeseball's career is our collective punishment for making Blurred Lines popular. Let's All get a divorce from this man."

Now-retired baseball pro Derek Jeter, basketball star Dwayne Wade and the whole Brazilian soccer team are among the athletes on the list, while politicians such as U.S. President Barack Obama and his former presidential opponent Senator John MCCain also made the cut.