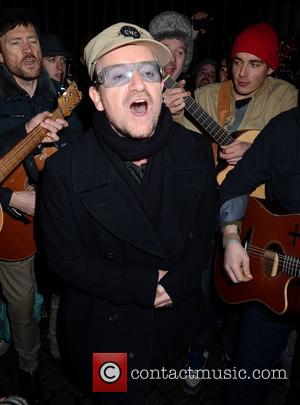 A former U2 bodyguard is still awaiting an apology from Bono after the rocker attacked him with a guitar onstage at a gig in Boston, Massachusetts in 2001.
David Guyer has detailed his exploits on the road with the Irish rockers in a new book, Road Rash With U2, and it appears he's still sore over one incident when he tackled a burly fan onstage as he tried to get close to Bono.
The tough guy tells Hustler magazine, "He was six-foot-four and weighed well over 240 pounds. I weighed 210, so it was going to be a lesson in physics. I hit him headfirst, perfectly square and precise. The jumper's body exploded with my energy as the shock wave took his skyward and backward. We flew about four feet."
The crowd cheered and Guyer felt he'd more than done his job only to find an unhappy Bono standing over him wielding a guitar.
He recalls, "Suddenly, I felt a dull thud on the back of my head and shoulders, a lady like strike that didn't hurt... I looked to my right... and Bono was smacking me in the back with his f**king guitar.
"I let the jerk up. It sickened me as this big a**hole ran to bear-hug Bono, spinning him in a circle. That's when I began hating Bono, who by the way, never apologised for hitting me with his guitar."
But, aside from that incident, Guyer had a great time as U2's bodyguard and drummer Larry Mullen, Jr.'s personal minder on the Elevation tour, admitting the Irish rockers were very well behaved.
He adds, "The band never f**ked any groupies... and I hardly ever saw any of U2's members plastered."