Richie Sambora Inspired By Daughter To Get Sober

Richie Sambora has revealed his daughter inspired him to go to rehab and get sober. 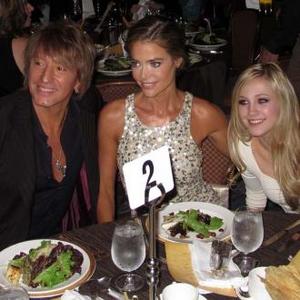 Bon Jovi guitarist Richie Sambora says his daughter was his motivation to get sober.

The Rock icon has admitted that 15-year-old Ava - his child with ex-wife Heather Locklear - was a ''big part'' of his decision to go to rehab to be treated for alcoholism for a second time last year.

He told Classic Rock Magazine: ''She (Ava) was like an angel to me, man ... that was the catalyst for me actually getting sober.''

The 53-year-old musician continued: ''Luckily I wasn't that guy who lost his band, his family, his house and his job. I wasn't a victim.''

His first spell in rehab was in 2007, after the death of his father Adam and amidst the breakdown of his marriage to actress Heather.

Richie blames being in a rock band for his substance abuse problems, which included heavy drinking and eventually a reliance on painkillers.

He explained: ''I was in a rock 'n' roll band! Drinking was a badge of honour.''

His prescription drug addiction started when he broke his arm just two weeks before Bon Jovi were due to start a stadium tour in the mid-2000s.

He recalled: ''I was in a bad way with my arm and I needed to get through it.''

Enlisting the help of ''various physical therapists,'' Richie began taking ''a bunch of pain pills,'' something he'd never done before.

He admitted: ''I've conquered a lot of stuff in my life, but when I tried to get off those things I couldn't do it ... I was drinking too, which makes it double bad.''

Despite his addictions, Richie thinks rehab isn't as bad as it's perceived and is actually a good experience.

He said: ''People look at rehab as a bad thing ... I looked at it as an opportunity to do something positive for myself.''