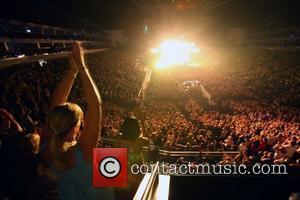 Bon Jovi star DAVID BRYAN is the brains behind a new musical all about the songwriting legends at New York's Brill Building.
The keyboard player has reteamed with the producers of hit, Tony Award-nominated stageshow Memphis to bring the story of the famous piece of real estate, which once housed the likes of Burt Bacharach, Neil Diamond, Gerry Goffin and Carole King, Jerry Leiber and Mike Stoller, Neil Sedaka and Paul Simon, to the stage.
He tells WENN, "We're writing another show as we speak. It's about songwriters and it takes place in the early 1960s set against the backdrop of the Brill Building, prior to when the Beatles came to America and changed the whole music business.
"It's an original story with original songs."
The working title of the project is Chasing The Song.