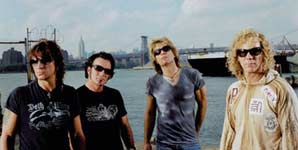 Bon Jovi have had a career spanning 3 decades and have sold over 100 million albums worldwide. Stopping off in the UK as part of their 'Have A Nice Day' tour, including playing to 65,000 people for two nights at Milton Keynes (having been pencilled in to open the new Wembley Stadium), we catch up with drummer Tico Torres for a brief chat.

Hi Tico, how is the tour going so far?
It's been excellent, we're winding down on it already but the shows have been phenomenal, we've been having a lot of fun.

Was it a big disappointment not to be able to play Wembley?
Yes and no. It was before we played Milton Keynes, but Milton Keynes was awesome. It was a great vibe, the moon was out, the peopleâ¦you know those kind of open air shows are a little different to the stadium shows. So as disappointing as it was not to play Wembley, especially as a lot of people were expecting to go to Wembley and it would have been easier for a lot of people to get to Wembley, it was cool.

The stage show has been stripped back from recent years in terms of pyrotechnics and stage props, was that a conscious decision to just make it more about the music?
Exactly. It's hard to beat yourself and do more explosions! We thought we'd go back a little bit and make it more pure.

You've also added Asbury Jukes Bobby Bandiera and Jeff Bozee to the live line up; what instigated that?
We never did it before and they're great friends, we've always done work together and played together so it was an easy transition. It's nice to be able to do the extra guitar parts, vocal parts and keyboard parts that are overdubbed on the record. It really does make these songs sound better.

You've mixed the set lists up a little between shows yet These Days and Bounce haven't had much coverage though. Does that indicate the bands' personal choice or what you think people want to hear?
A lot of times we go on regions, you try and listen to fan's requests in those areas. In England you try and look back and see what did well here. In America we were doing a lot of the new record cause fans really wanted to hear it.

You've thrown a few old fan favourites in there like 'Dry County' and 'Living In Sin'; which of the old tracks is your favourite to go back to?
Jeezâ¦ doing songs like that, like 'Living In Sin', I think we've done that once this tour. It's just refreshing to be able to say "lets do it" and I guess we're pretty good at picking songs out of the archives, outta the bag of goodiesâ¦.and lucky enough to pull them off live! It's like a challenge and a bit of fun for us and sometimes you make a mistake but it's ok.

The video for new single 'Who Says You Can't Go Home'shows some of the charity work the band do, tell us some more about that.

It's Philadelphia building homes for the needy you try and give a little back. You look around and you'd like to do that everywhere and think maybe that's the start of something you'd like to have grow on a global scale.

You've been making the live version from each show of new single "Who says you can't go home" available for download; how much has technology changed music since you started out?
It's helped push music world wideâ¦internet is a form of reaching people that can't be reached by radio. It's a different climate for musicians, I think if you're a young musician starting out it can definitely boost your popularity.

Bon Jovi didn't really break big until your third album; do you think a band would get that chance these days? Do you think that bands get signed, and consequently dropped, too quickly?
That's what happens when record companies don't have a lot of money. There was a time I recall I worked with Pat Benatar, years and years and years ago and Chrysalis records hired me and a bunch of guys to really form her into a rock singer. It was money well spent and they were putting money into bands and building a one, two, three record format. These days, you're right, they go for the fast bang and as easy as it is for young bands it's hard cos remember you've got to stay there too.

It seems almost like labels aren't interested in developing acts just get the record out, make the money and move on to the next thing.
Yeah it's hard to do that with music. I believe society in general worldwide is becoming a fast food Mecca! (laughs). The transition is just so quick. Jon (Bon Jovi) quoted that the European fans know the verses and in America they know the chorus.

Thinking along those lines; how important an album was Keep The Faith to the band and also to rock music in general given that a lot of your peers from the 80's saw their careers wane around that time?
It was our own personal statement, again we've been very blessed in the degree that fans still enjoy our music and young fans too, for almost three generations. Luckily we stuck to what we know best with our own music and not veer too far away from that and I think there was a good mixed fanbase for us and people really came along with us.

The crowds at the recent gigs have been evidence of that. What do you think has kept the band so appealing to older fans and also attracted new ones and kept the band so popular for over 20 years?
Somebody told me a story once about David Niven in his prime as an actor, he carried his fans all through many decades but neglected new ones, you usually keep your old fans forever. We've been lucky enough to hit the right chords, right melodies and right lyrics with songs that current for people of an age and that's what has given us consistency through time I guess. I wish I knew the formula.

Which new band or artist has excited you most lately?
There's a lot! I'm the worst to ask for names though! I listen to the radio and I like what's been happening in the last four years because there was a bit of a drought. A lot has to do with too much music and a lot of DJ music which really took over. You have a lot of musicians and a lack of a place to play; when we were growing up we could meet other musicians and transfer different styles of music and have fun and jam. I think it's a little more difficult and has been for the last fifteen years for musicians to do that because of a lack of venues.
A lot of new music and young bands are reverting back to classic music and taking that and having an interpretation of your own in today's market and it seems to be working. I really like what's happening and there's a good synergy and once you have, like anything, too much of one thing, you'll find more good music coming through.

You've done a Best of, the B Side and demos archives collection and an album re-working all the hits as well as having several live DVD's available; is there any particular project you'd still like to undertake?
No plans as yet but one of the things about this band is we try and re-invent ourselves in as many ways as possible. At this point you sorta get a feel for what this record is and the shows are and of course at the end of that you digest and I'm sure we'll come out with something really special.

Jon, Richie and David have all released solo albums, any plans for a Tico Torres solo outing?
In the back of my mind there's always gonna be a pet peev of mine where I get a lot of my musician friends together in the latin and jazz arena and do something in that field, possibly singing as well. Nothing in the immediate future but it's something that I've always wanted to do and I will take time on.

Obviously outside of the band you have a bit of a career in painting. Do you have anything lined up in the art world at present?
Not lately, it's kinda hard you know. I have a son who's two and a half and between the tour and the music it's kinda hard to get anything on canvas. But the nice thing about getting off the road is in a couple of months I'll be able to sit back and do some painting.

Obviously your career has had may high points, but what's the one thing that really stands out for you as being special?
I think what I remember the most, and it was the pivotal point of the band was on the third record when it went number one everywhere and we were supporting an American band called 38 Special. That's sorta like wining the lottery for guys like us. I mean it was like going from selling a couple of hundred thousand records to selling a few million and it was just like "Wow!!"
As a band we feel that we have to stay true to how we feel as musicians. We really love playing live for audiences and we try give 150% and even if you're sick you work through it and you try put on the best show you can for everybody. I remember growing up if I saw a band and I paid whatever it was at the time, which isn't nearly as much as it is now, and a band was laying back and I didn't get what I wanted as a fan I was disappointed, so I think from a bunch of guys from Jersey that kinda attitude of still being hungry we try and put that out on stage.