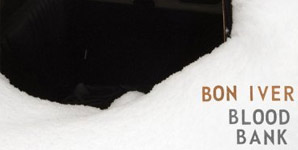 I think even Justin Vernon would've been surprised by the level of acclaim he received for his last album 'For Emma Forever Ago', as well as the acclaim, he also sold a huge amount of albums.

Moving onto 'Blood Bank', this is definitely more of an EP than long player, perhaps designed to keep interest flowing but Vernon has added a backing band. The short collection features songs recorded in 2006/07 and unlike its predecessor, it is a more normal effort, less acoustic and more experimental sounds. Normal might be a little unfair, the Fleet Foxes style use of vocals work well.

'Woods' isn't a typical Bon Iver piece but afer a few plays, it terns into an interesting listen. I feel more obliged to think of this EP as a double A-side single, with 'Blood Bank' and 'Babys' being the leading tracks and the rest a B-side.