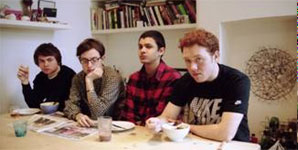 Bombay Bicycle Club are Jack Steadman (Lead vocals, guitar), Jamie MacColl (Lead guitar, backing vocals), Ed Nash (Bass guitar, keys) and Suren de Saram (Drums, backing vocals) and it's been a great year for the young London 4-piece. Since leaving school, they have been able to dedicate all their time to the band and have released their debut album I Had The Blues But I Shook Them Loose to critical acclaim. Having played all the main festivals this summer, their fan base is constantly on the increase and their chaotic gigs have become legendary! Despite their outgoing personas on stage, there was a certain shyness that came across when Contactmusic.com met up with the boys at the Secret Garden Party. Sitting on a piano under a tree (that can only happen at the Secret Garden Party!); amongst much laughter, they drank Mojitos and chatted about their debut album, being chucked out of hotels and their plans for the future.

Thanks for your time, you've been pretty busy, how has you're festival season been so far?
Jack: Fantastic!
Jamie: We started at Radio 1 Big Weekend; we've done 10 so far. The recent ones were Latitude and Lovebox then here.
Jack: And we played Glastonbury which was really cool because we had been 2 years before as punters!
Jamie: Yeah, we played 3 times! We did the Guardian Lounge, The Park Stage and the Queens Head Stage - the new one with all the lights! It was really cool! Yeah it was definitely like a privilege to do it like on the 3 days, not many bands get to do it.

You've received some stick for the name, is it true you're named after an Indian takeaway?
Jack: Yeah, we love Indian food! Look we've even got Bombay Mix! We just got really bored of trying to think of a name, so in the end we just stole one!

How did you get together?
Jamie: Me, Jack and Suren met at school. We knew Ed and we needed a bass player, so we recruited him at a funeral!
Jack:)Yeah and he's also a really good gymnast, so we thought he'd be really good on stage doing his trademark gymnastic moves!
Ed: Yeah, I do the crab with my guitar!

Despite your age, you have achieved huge success and it must have taken a lot of hard work; what's your driving force?
Jamie:)Youth!
Suren:)Probably Jamie.
Jack: Jamie's our driving force! And also stuff like this because it's really fun.
Jamie: I think the fact that we are still enjoying it, because if we don't enjoy it we tend to slack back on the accelerator.

So if you're not enjoying it, does it show in your performance?
Jack: Yeah, definitely! We don't smile or move around.
Jamie: If the crowds not that great, we're not that good at making them good, do you know what I mean? That's why we don't like supporting bands very much.
Jack: We're just used to having all these kids at our shows, breaking everything and going crazy and like jumping on stage, so when it's anything below that we're a bit disappointed!

Talking about crazy gigs, you've been blacklisted from playing a few venues! Why was that?
Jack: They just didn't like us playing naked! Yeah, we've been blacklisted from most of the Barfly's and then some Travelodges too - they don't like us at hotels either! So we asked our fans where they thought we should play and had a tour of unusual venues. We went down a mineshaft and played a gig and played on a boat and in a castle. We actually thought it was a lot more fun than playing at a venue anyway.

You've been compared to a lot of different bands; what are your influences?
Jack: We like a lot of American bands from the 90s, the independent scene; Pavement, Sonic Youth, Yo La Tengo.
Jamie: Although I hate saying we like Pavement because then people just write that we sound like Pavement.
Jack:)But we do like Pavement! And a lot of shoe gaze stuff, we listen to all sorts of things really. We're getting into Dirty Projectors and some of the bands playing here; Golden Silvers and Phoenix, they're playing.

Who does what creatively in the band?
Jamie:)Jack does all the writing.
Jack: I have a little studio in my room which I built when I was really young and I've just been recording ever since. And then I just send the guys the recording and we work it out.

You won 'The Road To V' in 2006; did it open any doors for you?
Jamie: Yeah definitely!
Jack: It was on TV right after Big Brother, so it got us out to a lot of people at a very early stage.
Suren: It was weird, we just got this email that said come and play at V festival, we thought it was a joke! It was quite hard because we were still at school. It definitely increased our fan base with the exposure on TV.
Jamie: It was quite frustrating because it felt like we had a chance to do something but we still had two years of school left, it was probably a bit premature in terms of our development.


How have you coped with that increased exposure and fame?
Jamie:)It doesn't feel like anything has changed.
Jack: I don't think we realised it anyway, but it's weird being recognised. And people think all these things about you but they don't realise you are just a normal guy.
Jamie: Yeah they think you're a lot cooler than you are!

You recorded your debut album 'I Had The Blues But I Shook Them Loose' with producer Jim Abbiss. How was that?
Jack: That was cool, he's been working with us since we were 16, so it was nice to do the album with someone you know really well. He really drove us, we need someone to give us a kick to do anything, so he was there to say 'come on let's do that again'.
Jamie:)He was really meticulous about everything, which is maybe not what we really care about with recording. We don't mind a bit of the sloppiness and I think he made it sound a lot bigger than we would have naturally been inclined to. We're really pleased with it!

How was it recording the full length, you recorded it in a studio near your homes, didn't you?
Jack: Yeah we recorded really locally, so it was ok. You'd just go in for the day and then go home and see your friends.
Jamie:)For the next album we probably won't do it in a studio round the corner because we'd like to get out of our comfort zone. I know it's a bit of a clichÃ© to do this with the second album, but I would like to record the second album in a different country. I'd like to go to Canada in the wilderness!
Suren:)I want to go to a studio in the Caribbean and there's one in Australia too.
Jack: We wouldn't do any work there! (Laughter!)
Jamie:)I think that would lower our focus a bit!
Jack: It's good to get really focussed, we have trouble focussing.

How do you shut yourself off and focus to rehearse or record?
Jamie: We can do it when we need to.
Ed: We don't rehearse!
Jack: We very rarely rehearse.
Suren: It makes our live shows much more spontaneous!
Jack:)All you need is a good drummer and then you don't need to rehearse, he rehearses all the songs by himself. The drums are always in time at least!

You said that you wanted to record the album before you signed to a record company; was that freedom important to you?
Jamie: Definitely! We wanted to record the album first without any interference because it was our debut album and we wanted to decide what it sounded like. Jim is very opinionated about the sound and he, well I suppose he's more inclined towards pop music.
Ed: I wouldn't say that!
Jamie: I wouldn't say that either, but it turns out that I just did say that! I suppose it isn't pop music, I don't know.he makes alternative bands accessible. He's done it with Kasabian and the Arctic Monkeys who have quite a lot of left field elements in their music and he gives them No. 1 albums!

So for those readers who haven't heard it yet, what can they expect from the album?
Jack:)Classic rock! (Laughter!)

Hmm, that's not quite how I'd describe it!!!
Jamie: I don't think it has a definite sound, it's like a mix and match.
Jack: Can we quote someone else? Someone said it was like being a teenager again, he was an old guy and he said he got really nostalgic listening to it.

I know its early days, but have you made a start on your second album yet?
Jamie: Yeah, the first bad review you get of the first album, you immediately start writing the second album.

Have you had any bad reviews?
Jack:)We've had some really bad reviews
Ed: They were evil to us!
Jamie: On the most part they were good but the ones that we've had that aren't good are like really vicious!
Jack: It's kind of like Marmite.
Jamie: There's one on Drowned In Sound and one in the Independent. And also this was our first experience of really bad press because I didn't think anyone was going to be really horrible to us when we were like 16 and 17! (laughter!).

How do you cope with it?
Jack: You just start writing the second one.
Jamie:)The first one is really hard but then you just accept the not everyone is going to like it and you take some of the stuff they say.
Jack: It's best not to read them, it's just someone's opinion.you shouldn't try and change, but it does drive you forward. We're recording an acoustic album which is talking a while but that will go in-between the electronic albums just to show a different side to us because we have a lot of acoustic songs too.

You're going to be busy! You've also got a tour planned for later on in the year - how do you cope with being on the road?
Jack: Jamie doesn't enjoy it!
Jamie: No, I do! I was the one who said this tour should be longer!
Jack: It's really fun. There's a lot of ups and downs 'cause it gets quite boring. We stay in Travelodges, but I think we might be stepping up to a Premier Inn!
Suren:)We recently stayed in a Ramada hotel; that was quite impressive!
Jamie: We still get really impressed by things like that, we still get excited if they have the soap dispensers in the showers - that makes us so happy!
Jack: But we keep getting chucked out of Premier Inns!
Jamie: We just had too many people in the room and we didn't like the art work. You know they have those generic pictures on the wall, well Jack took it off the wall.not 'took off'.like, ripped it off the wall and someone from the hotel walked in at the same time as he was doing it.
Jack: It was bolted to the wall.they got very angry!
Jamie: We slept in the van that night!

What's next for Bombay Bicycle Club?
Jack: Reading and Leeds and then the autumn tour.
Jamie: We're playing Summer Sundae; we're like really inexplicably high up on the bill, like 3rd from the top on the main stage. We're also shooting the video for our next single on Monday. It's called Magnet, its great! It's got a dub sound to it! Well it's got like a dub outro, so we'll go with 'a dub sound'!

That sounds great, good luck with it all and Thanks for your time boys! Enjoy the rest of the festival!