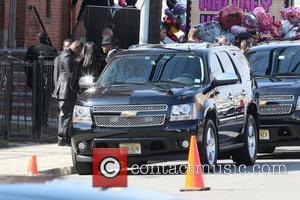 Just hours after storming out of Whitney Houston's funeral, Bobby Brown performed onstage with his band New Edition. Brown was reportedly unhappy with the seating arrangements at Whitney's funeral on Saturday (February 18, 2012) and a report from the Daily Mail suggests that it was because he wanted to be sat next to his daughter Bobbi Kristina but that the seating plan did not allow for that.
Brown reportedly paid his respects at Houston's coffin and left the ceremony early. Hours later, he performed onstage with New Edition at the Mohegan Sun Arena in Uncasville, Connecticut. According to USA Today, Bobby Brown arrived onstage 10 minutes later than his fellow band members before paying tribute to his late wife and the rest of his family. He is quoted as saying "I want to give blessings to my ex-wife, Whitney Houston, I love you. I want to give blessings to my kids, my fiancee (Alicia Etheridge), my brothers, and each of you, before adding "And if you didn't already know, I go by the name of bad-a** Bobby Brown."
USA Today spoke to New Edition fans after the show and one of them - William Mcgarrah - commented that he felt it inappropriate for Brown to be performing the night of the funeral, saying that the timing felt "a little insensitive, and (it) shows how much he needs the money. I thought he would take time off to be with his daughter."