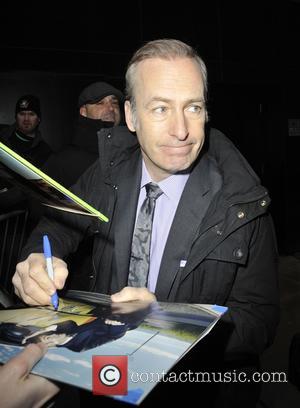 Breaking Bad fans have Bob Odenkirk's teenage son to thank for convincing the actor to sign up for the drug drama's new spin-off series Better Call Saul after he initially turned down the job to spend time with his family.

Odenkirk portrayed scheming lawyer Saul Goodman on the hit show and creator Vince Gilligan later approached the star to reprise his role in a prequel following the end of Breaking Bad in 2013.

However, the actor admits he was hesitant to head back to the set in Albuquerque, New Mexico amid fears he would miss out on too much of his children's teen years.

He explains, "I knew it would be wonderful writing and I knew it would be the opportunity of a lifetime, but they weren't sure if they were gonna shoot it in Albuquerque and I live in Los Angeles. Just at the time, my kids were 13 and 15 and I thought, 'Jeez, if they were just two years older I could just leave and it'd be fine', but there was too much going on... So I said, 'No, I can't do it if you have to shoot it in Albuquerque, I can't be a part of it.'"

Odenkirk's son Nathan found out about his decision and encouraged the 52 year old to reconsider, especially as his friends were all big fans of his Tv character.

The actor continues, "Once I said no, my kids heard that, just overhearing it - I never brought it up to them - and my son came to me and he said, 'Dad, I heard you said no to that show.' I go, 'Yeah, we're not ready for it yet', and he goes, 'You're gonna disappoint a lot of people' and I said, 'Well, I'm gonna disappoint a lot of strangers', and he said, 'Well, some of them are my friends.' He said, 'You should do it, we'll be good here. I'll step up', and both he and my daughter have done real well, and it's been a good thing."

Better Call Saul premieres in the U.S. this weekend (08Feb15). It has already been commissioned for a second season by Amc network bosses.