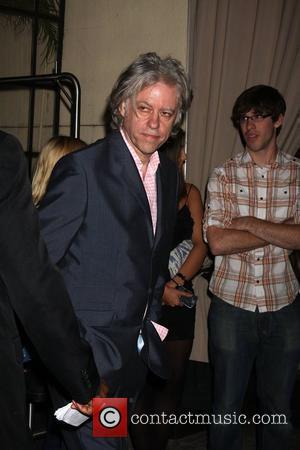 Music mogul HARVEY GOLDSMITH still can't believe he and Bob Geldof managed to stage the most famous concert in history in just 10 weeks - because it came in the middle of one of his craziest years.
The legendary British promoter initially had no intention of taking on Geldof's Live Aid, which took place 25 years ago today (13Jul85), after returning from China for Wham!'s historic tour and signing up Roger Waters after he had quit Pink Floyd, but the Boomtown Rats frontman was very persuasive.
Goldsmith recalls, "That was the maddest year of my life; I'd taken George Michael and Wham! to China. I was looking after Roger Waters when he split from Pink Floyd and then Bob Geldof was banging on my door saying, 'I've got this idea, we're going to do Live Aid.'
"I said 'Give me a call when I get back from China.' I went to New York (for Roger Waters at Radio City Music Hall). From New York, I went from Hong Kong to China and then came back and literally the first morning I came in the office, Bob was there and he said he was camping outside my office until 'we sort this out'.
"After an hour, we kind of mapped it out and talked about it and it was 10 weeks before the event."
But he quickly discovered that Live Aid hero Geldof had bigger plans than just staging a one-off charity concert in London.
Goldsmith tells CelebrityAccess.com, "Once we got London, Bob then said, 'We need to do something in America.' We couldn't get a venue in New York and (promoter) Bill Graham was trying to persuade us to go to San Francisco.
"I was pulling my hair out at that point because Bob was driving me nuts."
The show eventually took place between London and Philadelphia, Pennsylvania.