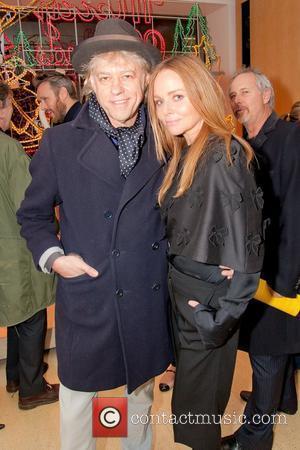 Rocker Thomas Cohen was terrified to introduce his future father-in-law Bob Geldof to his parents - until his puppy broke the ice by relieving itself in the house.
The S.C.U.M. frontman is engaged to marry Geldof's daughter Peaches, who is expecting the couple's first child in April (12).
The 21 year old admits he was nervous about meeting The Boomtown Rats star but the pair quickly bonded over their shared love of music.
He tells Britain's Daily Mail, "I was nervous about meeting Sir Bob but only because he's my girlfriend's dad, not because he's Sir Bob. He can see how in love we are and that's good enough for him. He is thrilled we're getting married and having a baby and hopefully he thinks I'll be a wonderful son-in-law. It's been lovely going into the Geldof family.
"The first time I met Bob, at his house, he showed me a film about the making of one of his music videos in Spain. It broke the ice and kind of bonded us... I instantly felt accepted and comfortable. I feel very at home there."
The nerves came back when the Irish star invited Cohen and his parents, social worker Keith and artist Sue, to dinner - but the tension eased after a pair of puppies made messes throughout Geldof's mansion.
Cohen recalls, "My parents were then invited to dinner by Bob and his partner Jeanne so the families could get to know each other. Bob has a different background to my parents but they have a similar outlook on a lot of things. I would say they have similar values.
"The whole evening was dominated by dogs pooping. Our golden retriever puppy Parper wasn't house-trained yet and neither was the Geldofs' puppy so it was quite funny really. Not a stiff evening at all - very relaxed."