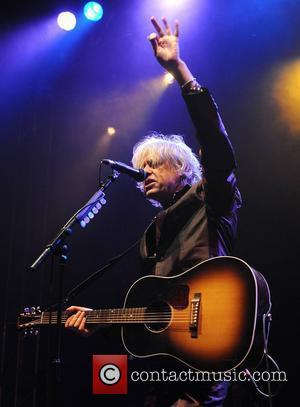 British rocker Bob Geldof celebrated his 60th birthday in style on Saturday night (01Oct11), by inviting showbiz pals Bono, Anna Friel and Roger Taylor to a fancy dress party at his English mansion.
The former Boomtown Rats star, who turns the landmark age on Wednesday (05Oct11), held a lavish bash at his sprawling property in Faversham, Kent.
Geldof invited his famous friends to party the night away in flamboyant outfits, with Friel turning up alongside boyfriend Rhys Ifans dressed in a white wig and pirate-themed costume.
Other stars to attend the event included Rolling Stones rocker Bill Wyman and Mick Jagger's ex-wife Jerry Hall.
Geldof opted to dress in a plain white shirt and beige trousers as his pals turned up in a variety of fancy dress outfits.